Lately, I've been thinking about a poignant dream I had back in the spring of 1997. I still remember it quite clearly and it comes back to memory frequently. Not all my dreams are significant, but this one seemed different. At the time I'd just started journaling again and I recorded the dream in my new journal. It is the 2nd entry, the first written several days earlier while on a plane for a week long business trip with two colleagues. It was on my mind when I wrote my last post and also on my mind recently when I saw the word "surround" in Psalm 17.
My God...hide me in the shadow of your wings...from my mortal enemies who surround me. (Ps. 17:8-9)
The dream was about a fierce tornado that swirled angrily overhead in an attempt to consume a building where I took cover. When it failed, it then shriveled into a "drunk man". I've always called it the tornado man. Here is how I described it that day in my journal.
*~*~*
I was with hundreds of people and a tornado was coming. We had plenty of warning. P.C. [My manager at the time of the dream] was in charge and delivered the message to take cover under the cover of this big building. In my thoughts I said, "this is crazy because the worst place to be in a tornado is in a big open room". But somehow I was told that the building would stay strong and would not collapse, bend or break with this tornado.
I watched as the tornado approached the building. [At this point I was watching the tornado from outside the building much like a changed viewpoint in a movie.] It came close, then backed away. Then suddenly it enveloped the building trying to suck us all out. I kept hearing the words to stay put. We would be okay as long as we stayed under the cover. Just then several people fled from the building. As soon as they left they were totally thrown about.
Then the tornado turned into a man and started walking on the ground with a knife as if to kill someone. The tornado man looked drunk. Someone tackled him from behind, brought him down and was going to kill him with a gun. But the tornado man turned and spoke the words "it is not for you to kill me" and then looked directly at me indicating that I must slay him. Indicating that next time it was important for me to do this.
*~*~*
As I reflected on this dream the other day, I wrote these words in my journal, "Tornados are unpredictable. They are fierce and yet majestically scary. Seeing the size of this F4 in pictures this morning scared me [especially this one]. They are not to be taken lightly...at all. Tornados are a destructive force. They swirl. They churn. They consume. They burst apart. They destroy."
Thinking about my dream took me back to some painful memories during my senior year in high school. The big building in my dream was actually the band room at my high school. Much like I did with the "Pretty Blue Dress" in the Talbot's window, I'm going to see where this connection takes me. We shall see. Perhaps I'll get to recover a precious story. :)
Posted by Small Glimpses at 1:37 PM No comments: Topics: Glimpses
Email ThisBlogThis!Share to TwitterShare to FacebookShare to Pinterest

In my attempts to "Reach Out" more in 2010, I want to share some of my stories. Maybe it's actually getting back my stories. Last week at lunch with my Wednesday lunch friend, I shared about an "untangling" that's happening in my life. A painful, but good untangling.

This is an old, old pain and one with lots of layers and a long cyclical history. Some of the tentacles are from being a "causality of war" in a family confronting its own issues and the resulting family dysfunctions and coping mechanisms that inevitably result.

As we talked something in what I shared evoked a memory in my friend of an NPR story from several years ago. Out of pure giving, a man sat on the Washington DC mall with his typewriter and listened to people's stories. He then typed up a short paragraph on what he heard, in essense giving back their story. Tears welled up in her eyes. I asked why. Her answer was, "I would be so honored to give people back their stories."

I don't know exactly what this means, but it touched a broken place in my heart. Perhaps because in some ways I feel like my family after at least 35 or 40 years of sobriety have never dealt openly with the wreckage of addiction and codependency. In the hidden turmoil, I think I lost my stories or lost those things most precious to me. Maybe this "reaching out" is a way for me to reclaim what's most meaningful to me. 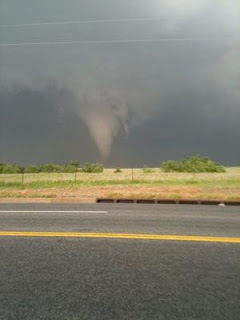 Recently my city was hit by several damaging tornados. Dear friends of our neighbor lost their house. They've returned to the property several times recovering what they can and hoping to find their most precious things. (We recently heard they found a very dear 1929 banjo; a treasured possession of the wife who is an artist and musician.). We all know it's a long painful process for this family. They are grateful to be alive and now they face the destruction; sifting, sorting, remembering ... keeping, tossing ... weeping, expressing gratitude.

They can't just walk away from their house and possessions and yet it feels like my family "walked" away from the wreckage once sobriety came. Few acknowledgements of the dysfunctions that contributed to the addiction or that grew from coping with the confusion.

At lunch my friend also shared a story from the Big Book that so aptly applies. Here is the full text:

The alcoholic is like a tornado roaring his way through the lives of others. Hearts are broken. Sweet relationships are dead. Affections have been uprooted. Selfish and inconsiderate habits have kept the home in turmoil. We feel a man [*or a family member] is unthinking when he says that sobriety is enough. He is like the farmer who came up out of his cyclone cellar to find his home ruined. To his wife, he remarked, "Don't see anything the matter here, Ma. Ain't it grand the wind stopped blowin'?" (pg. 52)

So I take courage from those facing the turmoil and loss from the tornados and I begin sifting through my stories. I hope to find those most precious to me even if they might show water damage, broken glass, or only a partial picture.

I am believing there is beauty even in these.