So the picture below is our newest addition to the family. It's actually a loner from a musician friend. Yes, B and I are taking violin lessons.

Ever since B started playing mandolin, I've had a quiet thought to play the fiddle. At B's urging we took the plunge. We started the same week so we are learning the same things which makes it extra fun and encouraging.

My mantra these last 6 months have been about taking risks and trying new things and this is one of them. Today I played my first scale. I'm hoping one day I'll be able to accompany Brad on some of our favorite songs.

Occasionally, the sound that comes from this thing makes my eyes tear up and I'm only bowing one single string without doing anything else! No fingerings, just bowing. The purity of sound is really something.

I have lesson #4 on Friday and can't wait. 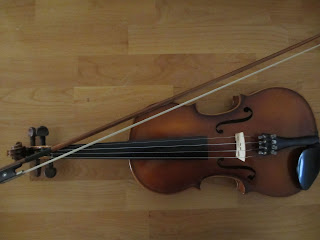 I've been pondering a lot about this notion of family secrets and how they impact not only the generation most closely affected but also subsequent generations.  It's the moon impacting the tides.  Two seemingly separate things, but intimately bound together.

A dear friend wrote me a personal email after reading my previous post on this topic.  We had a great conversation and she helped me gain the clarity about family secrets and what I wanted to talk about here on this blog.  I mentioned that my frustration revolves around not being able to talk about these secrets within the family and yet they have shaped and still shape some of our interactions.  I feel strongly that healthily incorporating this fact into our story will enable clearer connections.  Although the topics are known, they are only spoken about in hushed tones and only for the minimalist of moments.  One particular family secret is intimately connected with our 80-year old family cabin.

Several years ago I updated my blog template and used a picture of the sky above the cabin as my banner.  I took the picture on a day trip with my dad back in 2006 during one of our visits to Colorado.  I took lots of photos both inside and out and later used them in a video montage Brad and I put together for my parents 50th wedding anniversary.


The cabin was built in 1929 by my great-grandparents on my dad's side.  They along with several families from the community built "summer homes" in a cove off the highway.  Little of the physical structure has changed over the years.  The most "recent" was adding electricity in the 1950s.  Although we have an electric hot plate, most food is cooked in a wood burning stove which keeps the cabin warm along with the fireplace.  We have an enclosed porch with a bed, a fairly good size living / kitchen area (all one room), and a back bedroom with two beds and a back door which incidentally is the way to the outhouse ~ correct no indoor plumbing of any kind.

My great-grandparents had four children and the cabin now belongs to their families.  Ownership is governed by a trust put in place by my dad.  The last of the original four died earlier this year and due to my dad's declining health he wanted to understand me and my sisters' wishes regarding our fourth of the cabin.  This summer he talked to each of us individually trying hard not to influence our decision.  If we were not interested in keeping it then he thought it best to release our fourth before he died.

The cabin has always been a special place to me and for a long time was my most favorite place on earth.  Only two and a half hours from my childhood home and 45 minutes from both sets of grandparents, we traveled to the cabin multiple times every summer.  We opened it Memorial Day just after the last snow (removing internal posts and external shutters) and closed it in early September before the first snow (putting up post and shutters).  Usually we went up at least one other time during the summer and sometimes just for a noon picnic while visiting our grandparents in Laramie.  Names like Lake Marie, Brooklyn Lake, Little Brooklyn Lake, and Medicine Bow Peak have many attached memories.

My dad tells me that my great-grandmother and great-grandfather often went during the winter and even my oldest sister and brother-in-law honeymooned there after their winter wedding back in the early 1980s.  Snowy Range Road (Highway 130) closes to vehicle traffic several miles east of the cabin during the winter months so snow-shoeing or cross-country skiing a requirement.

Recently while walking the dogs, my husband and I talked about what we (really me) wanted to do about the cabin.  I shared that it seemed "life made sense" at the cabin.  As a little girl I didn't know why my dad's last name differed from his siblings or my beloved grandfather's.  I didn't understand why my sisters and I had a "third grandmother" (actually great-grandmother) with our last name that we regularly visited, but my cousins on my dad's side never did.  These cousins never went to the cabin except when we were there.  They were always guests, a feeling foreign to me in this place.

On reflection I don't remember when I first learned our family's secret.  It seemed I always knew my dad's dad died when he was a small boy just two years old.  Knowledge of the cause by his own hand was told to me a number of years later, but I don't remember the specific conversation.  My family never talked about it openly and rarely if ever did my birth grandfather come up in conversation especially around my grandmother.  Memories and markers always avoided.

I think this is why the cabin has a mythic quality of sorts.  This summer during a family reunion I learned that my dad's dad built the cabin's back bedroom.  His hands touched these walls and his feet walked in this place.  Perhaps this is why the cabin means so much to my father.  In this place is a definite connection to his father, someone he never knew.  This importance he transferred to me and my sisters both consciously and unconsciously.


During that walk with my husband he described this place as the "holder" of family memories, the family legacy and the family myth.  I knew he was right when he spoke these words.  They beautifully frame my experience, but until I wrote the previous paragraph I didn't grasp the full truth.  This is the only place on earth where my father walks where his father walked, opens doors he opened, builds fires or eats meals.  This is his place of connection.

I know I've got more to write and more to puzzle through regarding the ongoing impact of this family secret, but for now this is a good place to rest.