I've been needing and wanting to write this blog entry since we said our last goodbyes to our faithful and devoted Streak.  It still hurts very much when I reflect on his last 7 months after we discovered he had lymphoma.  At the time he was still strong and had much life for a 13 year old.  He still wanted to be with us and none of us were ready to say goodbye.  But by the time of his last treatment 8 months later we knew it was time and Streak let us know as well. 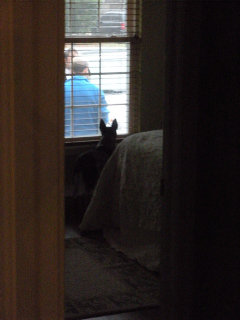 A good friend of mine shared something that comforted me during Streak's last year.  She said Streak had a God appointed job to be with us.  His job was to be fearlessly loyal from the first day he came to us to his last and Streak did just that especially with Brad.  He was appointed to be Brad's guardian.  To bring Brad life and to bring him healing.  To be his companion and to demonstrate loyalty and devotion.

One of my favorite memories is seeing Streak and Brad as they walked up the stone path we laid in memory of our Alafair.  Streak would be right next to Brad as they walked to the house.  Another special memory is of Streak wanting to be with Brad after he finished breakfast.  After his last bite he would trot back to the bedroom and wait for me to open the bedroom door.  Up on the bed, he would jump and most times snuggle in next to Brad; always close and always there.

We called Streak "our sentry".  When we let him outside he took several laps around the yard, not playful but very deliberate and dutiful.  Once secured then it seemed he relaxed.  Streak is the first dog I ever saw smile (or that I realized smiled) ~ His eyes bright, ears high on his head, tongue visible with his cheeks pulled back to his ears.

Our last day with Streak was April 7.  It was a Thursday.  A week earlier we realized that an additional treatment would be too much for our little buddy.  Reconciling to that reality was hard, but we knew the time was coming.  His breathing seemed labored and his panting more frequent.  We could tell the pain in his eyes had intensified.  On Wednesday night we decided it was time and we would take him to the vet in the morning.  That night I slept at the foot of the bed with him.  I wanted to be close and to comfort him, pet him, and talk to him.

Without a doubt Streak completed his appointed purpose on this earth and in his death he gave us two gifts.  He gave us back our memories of Alafair and delivered us our sweet Grace.

In retrospect neither Brad nor I really worked through losing Alafair.  Her last days were so unexpected and so, so painful.  When we needed to put her down it was too painful and neither of us could be there.  Deep down I always felt I'd let her down.  I decided with Streak that no matter how painful that I would be with him through the end.  Brad and I both stayed with him and as it turns out it was peaceful, sacred, not scary.  I stayed a few moments alone with Streak.  I bent down, kissed his muzzle and then whispered in his ear to tell Alafair that I was so very, very sorry and that I loved her and missed her.  Tears rolled down my checks and I said goodbye.  The next morning for the first time since Alafair died in 2007, I looked at pictures of her and watched several videos.  Hearing her bark and watching her play with Streak was so tenderly sweet.

A week or so after Streak died Brad's Mom called and said her friend's daughter wanted to give us a Border Collie.  She heard about our Streak, never met him but knew how much he meant to us.  During the conversation my mother-in-law mentioned that if we didn't want the puppy that she might take it.  She'd been thinking about adding a dog to their family, too.  Brad and I talked about it but decided it was too soon.  So Brad called to say we would pass.  Turns out they were offering two puppies: one for Brad's Mom and Dad, and one for us.  At this point we knew it was meant to be.  Three weeks later we drove to Colorado to meet our new puppy.  We named her Grace.

So Streak knew better than we did.  He knew we needed Grace.  He knew the grief would be too much.  He knew we need not hang onto regrets and we needed to receive forgiveness.  He hung on through the treatments to the most perfect day when we all could say our earthly goodbyes and then soon would be able to welcome another bundle of puppy joy into our home.

We miss you dearly. 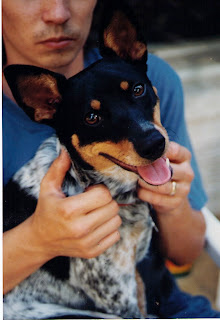 Let light perpetual shine upon him.

Streak was a special dog--thanks Lis for the special post. We miss him too.

This made me cry. I am so grateful for how your precious animals have faithfully served. What a beautiful story!

Melinda - Thank you for your part of this story. Your wise words about Streak's God appointed mission is still so precious to us and has helped lesson the grief. We are so glad you got to see him before we had to say goodbye. Your visit to the house was a precious moment both for me and to B.