I came to the well this morning much defeated and dispirited.  I didn't expect to see anyone.  I went alone on purpose at a time when no one else goes.  It is always very hot at noon, but in the end it is easiest.  Yes, I do want this water he spoke of and to never thirst again.  But especially to never have to visit this well again.

I think he must have seen my expression change and caught a glimpse of my sadness.  It felt like his face softened.  Once again his words were completely unexpected.  He asked me to go get my husband.

Jeesh!  The thing is I've been married five times and I'm done with it.  I'm with a guy now but making no plans for a sixth husband.  I don't even want to get into this.  Lots of pain, lots of complication, miles of hard road.  Cycles of destruction and rejection.  I would just rather not talk about this.

I grabbed my water jug so I could leave, not to "go get my husband" but to evade the engulfing shame I've been hoping to escape.  Up to this point I'd held nothing back so my answer was short just that I didn't have a husband.

It wasn't a lie, but not the full story either.

Get this!!  It's like he read my thoughts.  He brought up that I'd had five husbands and now with someone who's not my husband.  How did he know that?

And then you won't believe what he did next.  He affirmed me!  He affirmed that I spoke truthfully.  I cannot explain what his affirmation did...deep, deep down in a long ago devastated place.  The disappointments deep, but somehow I have...not even sure the words...somehow I just keep going but it's not without a cost.

I told him he must be a prophet and then something came to mind that I'd always wondered about.  More truthfully, though, I really just needed to change the subject or I knew I'd fall apart right there, right then, right in front of him.

I asked about worshiping and why his people are so adamant about worshipping in Jerusalem.  They say it is the absolute place we must go.  It's always bothered me because the thing is my people are certainly not welcome there...it's a catch twenty-two really.

Again his answer took the conversation to a whole other plane.  He talked of a time when worship would be in neither place, not there and not here either, and he mentioned bowing before "The Father".  He said my people didn't really understand what we worshipped.  In actuality I understood these words because my people have a long history of putting our trust in many different things.  Pledging our allegiance only to be disappointed by their silence. 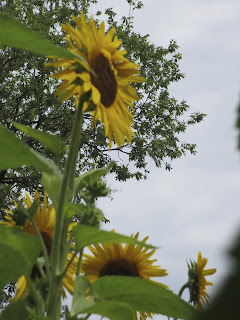 He said a time was coming and actually spoke of it as present...a NOW moment when true worshipers would be worshiping this Father by Spirit and Truth.  He said that the Father is actually seeking people that want to know him, who are drawn toward him, and want to surrender to him.  He mentioned this Spirit and Truth again, that they were needed to worship the Father...honestly all very confusing to me.

This man, this prophet; he is like no other.  Like no one I've ever met before. What he said is amazing.  So full of mystery and totally beyond my thoughts and imagination. He spoke of things that hopefully one day the Messiah will explain.   He is coming one day at least that is what I'm supposed to believe.

I wonder what it might be like if or when the Messiah comes.  I wonder what he will look like and how he'll act.  Certainly he will be strong, smart, a warrior, coming as a long awaited king.  I'm certain though he won't visit our town.  Speaking more to myself I said aloud, "You know the Messiah will come one day and will explain everything to us."  I gathered my jar and began drawing his water.

Then he quietly said with this amazing inner strength, "I am He, I, the man talking with you."