Today this man asked me for a drink of water.  He was sitting alone resting apparently weary from his walk.  Taken aback by his request and because I was lonely and a bit angry I snidely said,

"Why would you ask me for a drink when most people like you want nothing to do with people like me?"

I expected him to ignore me or give me a dirty look, or worse yell at me.  But he did none of that and maybe even flashed a tiny smile.  Instead of pulling away he seemed to invite me to more conversation.  While looking down and with a slight lilt in his voice he said, "If you knew the free gift of God and who is asking you for a drink, you would have asked him for Living Water and he would have given it to you."

How strange of him to talk in third person.  That was certainly not the answer I expected.  Him now offering me water.  He turned the tables a bit.  That's kinda funny.  Such a nice man and so respectful.  It'd been a long time since someone treated me like that. 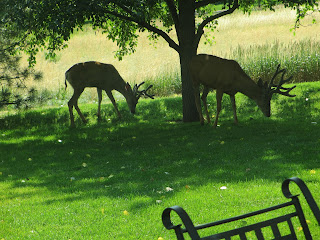 Strange thing though, he didn't even have a bucket to draw water and where would he get this water.  Living Water is what he called it.  What on earth is Living Water anyway?  Made me wonder if he thought he was better than my ancestor who gave us this well.  He and all his children and all their flocks drank from here.

So I told him exactly what I was thinking.  I thought he might get angry, but he didn't.  He actually said something pretty bizarre and actually a little bit weird.

Pointing to my well he said, "The people who drink from this well will thirst again.  Your ancestor was thirsty and you will certainly thirst again...BUT," and then he pointed to himself, "anyone including you who drinks, who once drinks the water I give, they will never thirst again.  In fact and THIS is the awesome part," at that point he was smiling so brightly and so excited,  "the water I give, and I will give it, in that person it will become a Fountain of Water.

"This water, this Living Water, will gush up...come gushing up into deep," and I swear he looked deep into my soul, "deep lasting...Life."